Less than a month after winning the PokerStars Caribbean Adventure Main Event, Dominik Panka was crowed the champion of the PokerStars.fr EPT Deauville High Roller on Saturday, beating a record-breaking field to claim the first prize of €272,000 at a final table that lasted just six hours. Panka beat Albert Daher heads-up after a short battle that was still strongly contested. The final two players were the dominant stacks at tough final table that featured four former EPT Champions, as well as the WSOPE Main Event winner Adrian Mateos Diaz, and Ondrej Vinklarek, who was the EPT Season 8 Player of the Year. Panka and Daher eliminated all the other players on the way to their heads-up battle.

Diaz was the short stack coming into the final table and the first player eliminated. He raised and then four-bet all in with against Panka's three-bet. Unfortunately for Diaz, the PCA champion called with which held up through a board. Despite the quick exit, it's still a good start to the year for the Spaniard who picked up two trophies at the GPI European Poker Awards a few days ago. 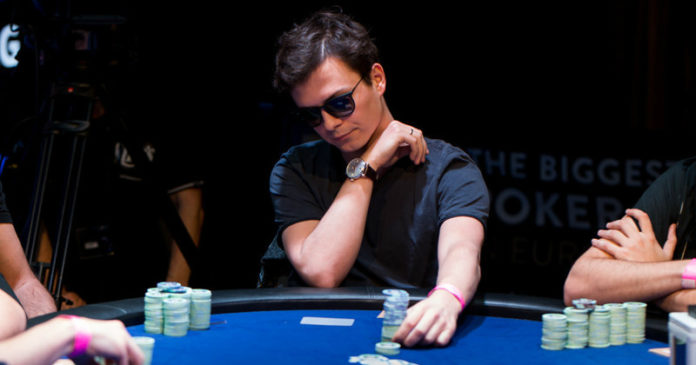 Russian Nikolay Losev, who had not had a recorded cash in more than two and a half years, was the second man out at the feature table. His check-raise all in on the turn was called by Daher's top pair and the board bricked out.

This increased Daher's chip lead briefly but with the advent of six-handed play, Davidi Kitai stepped up and began to spar repeatedly with Daher, winning the majority of hands. Kitai managed to hold the chip lead for a spell but he twice tried to bluff into Panka's aces, and the second time would also become the last.

Kitai ended up five-bet shoving all in with and could not conjure up a miracle board against Panka's when the board came . That pot gave Panka the chip lead for the first time.

Immediately following the Belgian's exit, former EPT champion Martin Schleich was the next man heading to the rail. Again aces were the cause as Daher picked them up to knock out the short-stacked German.

That left Panka, Daher, Kent Lundmark and Ondrej Vinklarek remaining, with the latter two being the short stacks. Vinklarek was eventually eliminated when his push over Daher's button raise was called by the Lebanese player's . Vinklarek showed and was briefly ahead on the turn of a board before the , usually such a harmless card, was put out on the river to dismiss the Czech player.

As Daher and Panka continued battling each other intently, Lundmark was simply trying to keep afloat. Finally the Swede moved all in with from the small blind and Panka gave him a spin with in the big blind. Both made a pair but no more on the board.

Panka began the heads-up battle with the lead but only by four big blinds. Daher took the lead early on, but two crucial pots both went the way of the Polish player. Daher was crippled as a result and victory for Panka came soon after!

The next EPT High Roller event will be in Vienna next month, and the Pokernews Live Reporting Team will be there to provide you with all of the key moments.

Unblocked games 77 tank trouble. Until then, it's over and out from Deauville!